On the face of it, you have to admire the “idea” of veganism. These people are willing to make personal sacrifices in order to avoid killing or hurting any animal, and that has to be praiseworthy, right? Wrong! In fact, as I’m about to show, I don’t even believe there is such as thing as a “true vegan”, at least not in a modern Western society.

Then there are “ethical vegans” who carry that philosophy over into other areas of their lives, and won’t do anything or use any product which uses animal resources or harms an animal in any way. It’s this second category which I’m talking about here (while I believe it is possible to live a true “dietry vegan” lifestyle if someone chooses to, I don’t think it’s possible to live a truly “ethical vegan” lifestyle while living in a modern Western country)

But hold on Billy, whey are you having a go at vegans, they aren’t doing any harm and they are trying to live a sustainable and ethical lifestyle?

Yes they are, but they are also in denial. They might claim to be living a purely vegan lifestyle, but as I’m about to show, that is simply not possible. I’m not really going into the health or ethical arguments here (though in my opinion there is a very good case AGAINST veganism in both cases, and I may go into that in a future article… and don’t even get me started on vagan parents who force their children into a vegan lifestyle!!) I mean only to show how and why any person claiming to be a true vegan while living in a Western country such as the UK, Western Europe or the USA is either lying, or in denial, and so has no rights to take the “moral highground” in any discussion about the subject.

Not eating meat and fish  is fairly straightforward. Have a salad rather than a burger, tomato soup instead of oxtail, cauliflower cheese instead of roast chicken… Of course, you’d have to ensure that your vegetables are grown without the use of animal products, and generally vegans are attracted to organically grown produce but oops – most organic fertalisers are based on animal products. Fish blood, bonemeal, “hoof and horn”, chicken droppings… the list goes on. There are of course non-animal based organic fertalisers, such as those made from seaweed, so we’ll assume that all true vegans are checking that their vegetables are only grown using that (which of course would mean checking the source not only of vegetables bought to cook at home, but those used in restaurants, or in any processed/packaged foods too. Not an easy job, but I guess it’s possible with a bit of effort)

If vegetarians eat vegetables, what do humanitarians eat?

Avoiding dairy and eggs should be straightforward too right? Just don’t eat anything with milk, cream, butter or eggs. These days you can buy a plethora of non-dairy products made from coconut, rice and soya. Of course, as we’ve already seen you’ll need to check that those soya bean farmers aren’t using a bonemeal fertaliser, and that donkey’s are’t being used by the rice farmers, but again I guess that’s all possible with a good amount of effort, so what’s next? Ah yes, processed foods…

To be honest, it’s probably best for a vegan to just plain avoid all processed foods entirely. The reason being, that there are just so many animal products packed into them that avoiding them would be almost impossible, let’s take a look at a few of them:

Wine, beer, and other alcoholic drinks. Yes there are a few which are marketed as “vegetarian”, but the vast majority use isinglass (a geletin extracted from fish guts) during the filtration process.

Margarine – if you’re avoiding butter then margarine is an obvious alternative right? Wrong – most margarine contains tallow (from sheep and cattle)

Bread – Assuming you could confirm that the wheat wasn’t fertalised with animal based fertaliser then bread should be vegan friendly shouldn’t it? Again no, because almost all commercially baked bread uses lactylic stearate as a dough conditioner, and that is derived from tallow from sheep and cattle.  Of course lactylic stearate isn’t only used in bread, but also other baked goods such as pancakes, waffles, cakes, puddings, plus cereal based snacks, sauces and lots more.

Fruit juice – you can’t get much more vegan friendly than fruit juice surely? Except that a lot of commercially produced juices use carmine (carmine cochineal or carminic acid) as a coloring which is derived from insects!

Breakfast cereal – first you need to avoid the ones which use powered skimmed milk in the ingredients (that’s the easy part), but then you need to avoid the ones that use lecithin (often not on the label) which is derived from animal tissue or egg yolk (it is also possible to get lecithin from soya, but I’ve never once seen that distinction made on a label). So I guess the best thing would be for vegans to avoid all breakfast cereals, other than organic muesli (checking that the grains were not fertalised with animal products) and soaked in orange juice rather than milk, but of course choosing a juice that doesn’t include carmine!

The list goes on, and on, and on… if you’re interested you can read about loads of animal derived ingredients and where they are often hiding at http://www.happycow.net/health-animal-ingredients.html

But to be honest, avoiding foods which don’t use animal products or by-products is the easy part, let’s take a look at what else the “true vegan” would have to avoid…

Medicine – Yeah this is a big one. What do you think happens to the average hardcore vegan’s ethics when they need a cancer drug but the pills are coated in a non-stick outer layer made with rennets from a sheep’s stomach to make them easier to swallow? In fact animal products are used extensively in medicines and cosmetics, not to mention the fact that the medical industry of course uses animals to experiment and test on. So the true vegan who wants to stand by their ethical claim should really avoid all modern medicine – if they get ill then tough luck I guess!

Glass – do you know any vegans who have glass windows in their house or their car? Or glass lenses in their reading glasses? Or a glass fronted screen on their iPhone 5? Well animal bones are an important material in the glass production industry, so all true vegans will probably want to avoid all glass products.

Paint – if you’re not having glass windows in your house or car, you shouldn’t paint them either since animal fat is used extensively in the paint industry. And while we’re on the subject, you’d better avoid sheetrock, plywood and wallpaper when you’re building your unpainted, windowless house since animal skin is used in the production of both of those products, and animal fat is also used in the production of many types of insulation but that won’t matter since the house will be pretty drafty from the glass-less windows anyway. And the floors had better be bare, since both carpet and linoleum use animal products heavily in their production!

Once again, the list could go on and on and on… but I think I’ve made my point. It really is NOT possible for someone to be 100% truly vegan.  So if you are vegan then please, next time you decide to take the high moral stance and have a go at us lowly, “animal eating barbarians” please take a moment to realise how hypocritcal you’re being, or go and live in an unpainted, windowless house with no carpets, eating home grown vegetables fertalised with seaweed and don’t complain when you get an ear infection and can’t take antibiotics! 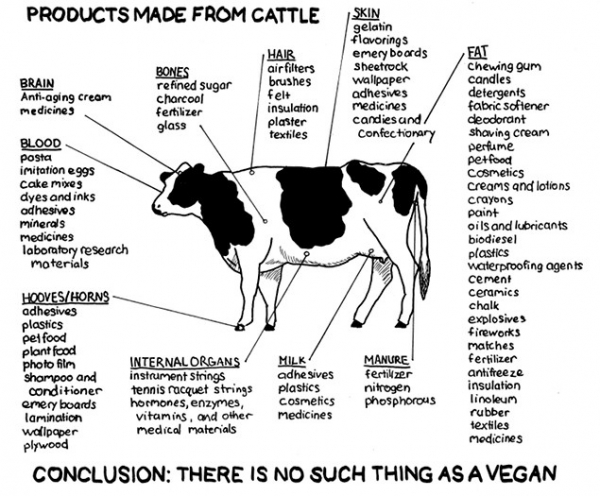